Millions of people ride bicycles everyday - for pleasure, for exercise, for transportation. Riding with friends is a favorite pastime for many, and Ben Bingham’s client was no different. He, his wife, and his brother decided one evening to go on a “wing ride” where they rode their bikes from place to place sampling the hot wings at each. As they were finishing up and heading back to their vehicle to load up the bikes, the driver of a gentlemen’s club SUV grew impatient with their slow speed, honked at them, then proceeded to pass Mr. Bingham’s client. While passing, the SUV clipped the handlebars of the bike causing the client to go down. The SUV then ran him over and attempted to flee the scene, held there only by the client’s brother blocking his path. The driver claimed that the client should have seen him, but the client was blind in his left eye from a past injury. Fearful of large hospital bills, and hospitals in general, the client refused transportation and instead waited until morning to visit an Urgent Care facility. Upon examining him, he was told that he needed to go to an ER. His injuries were substantial, but he was reluctant to have surgery. He visited many practitioners for pain relief, from acupuncturists to pain specialists. Eventually he agreed to the recommended surgery of an anterior fusion of C6-C7, but instead of feeling better, he was still in a lot of pain. It was determined that he needed further stabilization, so he had surgery again to perform an anterior fusion of C3-T1 and posterior fusion of C3-T4. Between those two surgeries, he also had surgery to repair his shoulder. He continued to have pain even after the second spine surgery and it was determined that he had developed a MERS infection, so they had to pull the existing hardware out and do a final revision that stretched from C3-L1, essentially fusing almost his entire cervical and thoracic spine.

The driver claimed that Mr. Bingham’s client staged the accident to try to get money and the defense refused to come to a resolution, never even making a pre-trial offer in four years of litigation. Mr. Bingham then partnered with Geordan Logan of Claggett & Sykes to take it to trial. Mr. Bingham and Mr. Logan came to Focus Graphics to create a massive surgical animation depicting each of the surgeries that would be utilized throughout the trial with each of their experts. We also suggested a 3D model of the spine that would show all of the hardware to give a first-hand view of what the client’s spine truly looks like after all of the surgeries. CT and X-Ray colorizations were created as standalone exhibits, as well. Halfway through the trial, the defense came to Mr. Bingham and Mr. Logan with an offer of $500,000, but they were confident that the jury wasn’t buying the story the defense was laying out. They were right - the jury returned a verdict of more than $14 million with zero liability for the plaintiff. 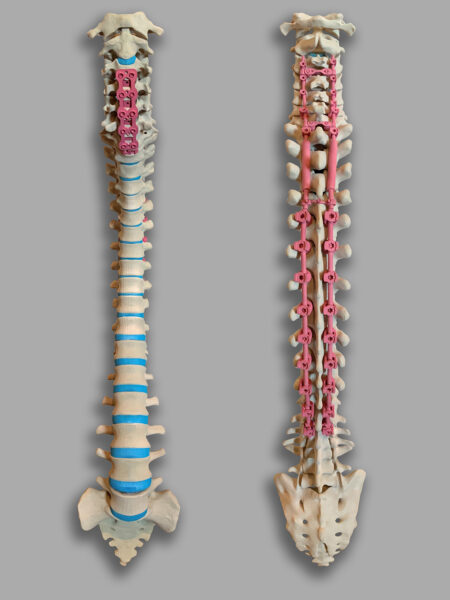 “When Ben came to us to partner on this case, I knew that, based on the severity of the injuries and the many surgeries, that we would need some good demonstratives. I reached out to Focus Graphics and learned that they had just done a 3D printed spine for another attorney. Given the almost complete fusion of our client’s spine, there was no doubt in my mind we needed something like that to really illustrate his day-to-day challenges. We also wanted to emphasize the client’s suffering by showing the surgeries, so Focus Graphics put together an animation of all the surgeries which were shown throughout the trial during expert testimony. Ultimately, this package of animations and the physical spine were very helpful to the jury when making their decision. Anyone who goes to trial without visuals from Focus Graphics is leaving money on the table.”

Ready to find out more?

Our team of animators, illustrators and medical professionals are ready to make your demonstratives ready for your next mediation or litigation. Click on the link to the right or give us a call (702) 849-0090.